Our Voyage down was reasonably calm with only a moderate swell and NW winds. The Plancius arrived in Antarctica during the early morning of the 20th. By the time the passengers were up and awake we were sitting of Couverville Island – a small outcropping on the edge of the Antarctic Continent.

Snow conditions at present for mountaineering have been challenging – lots of loose wet deep snow which has meant that the guides, Mal (NZMGA) and Cube (AKA Alister – BMG) have been doing plenty of deep plugging – snow shows have been a bit of help but overall the going has been pretty slow.

It is also fairly warm – with overnight temperatures only hovering near the 1 degree mark and during the middle of the day reaching up to almost 10 degrees!

This warm cycle kicked of a reasonable avalanche cycle yesterday and we needed to keep off all steep slopes for a few hours.

The news isn’t all bad however – we’ve been walking up a few small peaks, exploring some new areas and the passengers – when not out with us walking on a glacier or up a small hill – have been sea kayaking, zodiac cruising and or wildlife watching.

At present we are 1/2 way through out first trip – with another 2 1/2 day to go before we start to sail back north to pick up our next set of passengers.

Over the next few days we plan to try one or two small peaks as well as some extra ice climbing on some benign Seracs. 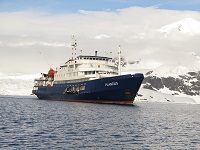 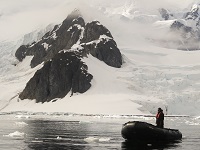 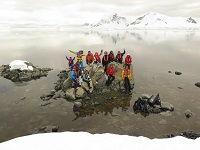 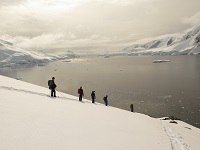 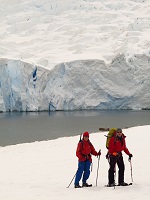